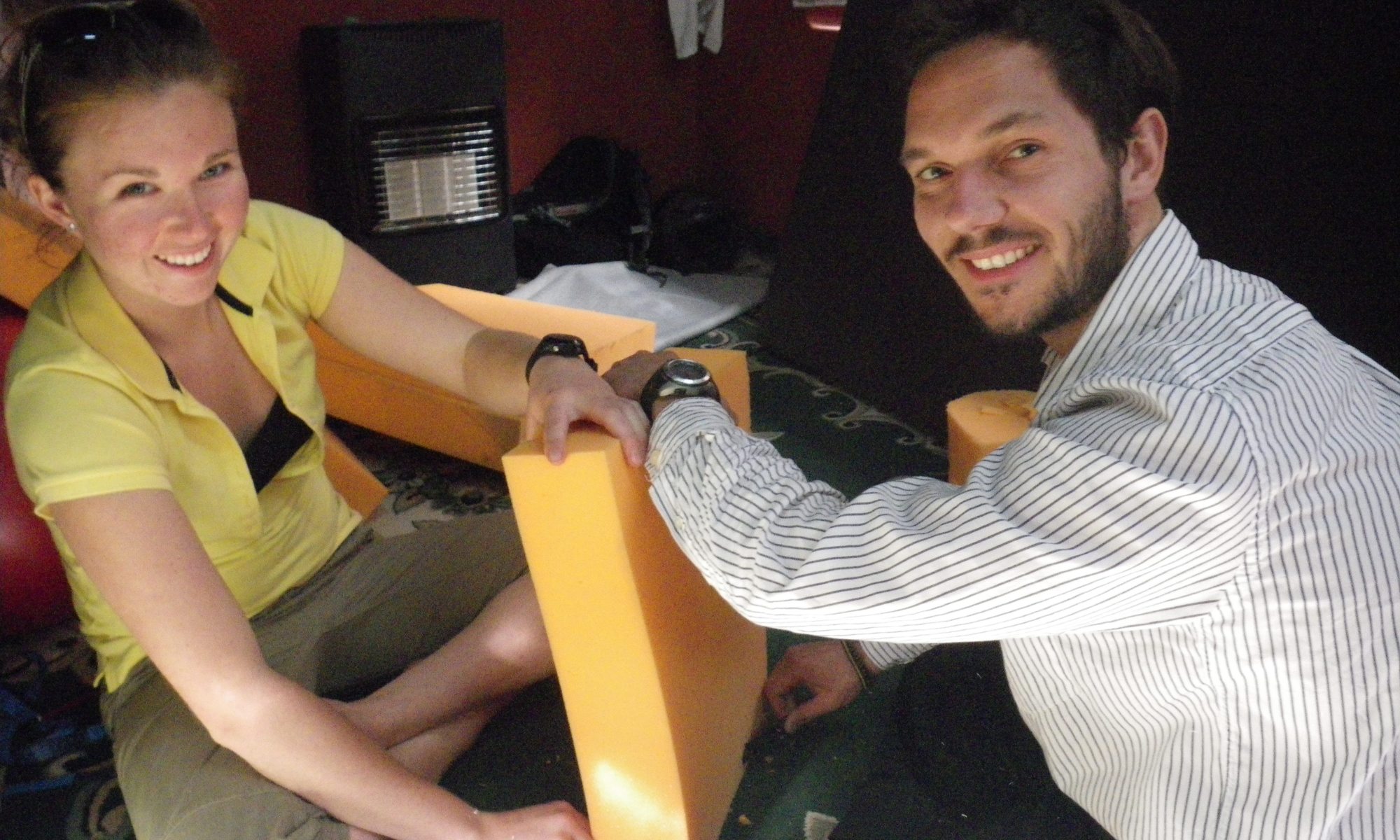 Three things to love about Nepal: (1) Everyone horks and spits even ladies even on the bus (2) To sooth their children, people make clicking sounds like you might make to call a horse (3) When a tuk-tuk (a mix between and small car and motor bike that we ride to work in everyday) gets a flat, 2 or 3 man passengers with the driver will have it changed out in less than 3 minutes without barely pulling off the road- we didn’t feel a thing.

The human rights film fest that Phil mentioned in the last post was a pretty rad event. It seems that there is always a festival of some type happening here. If its not religious, there’s a music, film or outdoor fest unravelling in some corner of the city at any given time. Unfortunately, nothing seems to be very well attended, especially by Nepalis. Some of the organizations are working hard to bring the productions into high schools to promote involvement and awareness which is really cool to see. Nepal has been through a lot in the recent past- The book “Little Princes” by Conor Grennan is a great account of the lives of a number of children taken from their homes during the Maoist conflict in the early 2000s.

The rest of our week was spent fairly uneventfully at the hospital and the school. We found out that our formal clinical instructor was going to be another 5 days later than we expected. If it weren’t for the Dutch therapist, Thea, we would have been in a pretty twisted pickle up to this point… Thankfully she has been a great teacher. We Managed to get out for one more film and some amazing food with Thea and the Belgian girls who have also been volunteering at the school.

Saturday was an AMAAAZING day. We met up with a mountain bike guide who I met at the music/ outdoor fest, rented a couple of beauty French bikes and took off for a half a day of riding in the countryside to the south of Kathmandu. So nice to get out of the madness of the city again and to see a little bit more of the surrounding villages. Great ride with some single track and a massive suspension bridge. I took a few slow motion bails in typical fashion but remained in one piece.. Never know if you don’t try it right!? Have lil’ bro Johnny locked in for some lessons once I move back to BC which will be wicked. Being in the moutainy hills certainly makes me miss home! Anyway… great day and some good exercise. Nice change of scenery.

What next…? We always wait WAY TOO LONG between posts which makes this more difficult than it needs to be.

The rest of the weekend we spend touring around the surroundings of Kathmandu. First off we walked east to Swayambunath, more commonly referred to as Monkey Temple by tourists. This entailed walking across the Bagmati River which is chalked full of trash and gets worse and worse as the water gets less and less into the dry season. Its awful but one can’t blame the people who don’t even have a government let alone civil infrastructure (if that’s a legit term to use?) enough to have waste management under control. Its the river or little fires by the side of the road producing an unmistakable smelly smoke. As a side note, rumour has it that England pays India to allow them to dump British trash out of sight, out of mind. Anyway, our destination was a stunning, gold-plated Buddhist temple up on a hill top where scads of monkeys have quite comfortably moved in. Had a nice wander around, saw a monkey shwack a handful of strawberries from a vendor… Bought a toonie from a weird old medicine man for 180 rupees.. Pretty much the going rate. We were a little confused when he showed us his coin collection and upon finding out we were Canadian busted out a toonie he desperately wanted rid of… Not sure what he was up to. Maybe he mints them deep down in the temple and rips off lowly Canadians like me on a daily basis. As soon as he got his rupees it was the cold shoulder…

That afternoon we then headed to the hospital for our VERY FIRST IFCH OPD PT assessment! We were planning to do one assessment on a baby with CP but when we arrived there were two waiting.. We set to work with the hospital PT and did two GMFM (ish) assessments on our brand new mats with our brand new toys in our brand new PT room! All of a sudden it is in working order! Very exciting for both of us and hopefully for the hospital PT though it is hard to know what he is thinking much of the time. All-in-all the assessments were a success and even though I had to ask the PT 3 times to please explain to the parents why Phil was sitting on their baby, everyone left satisfied. It was a great feeling to see some of our hard work in action.